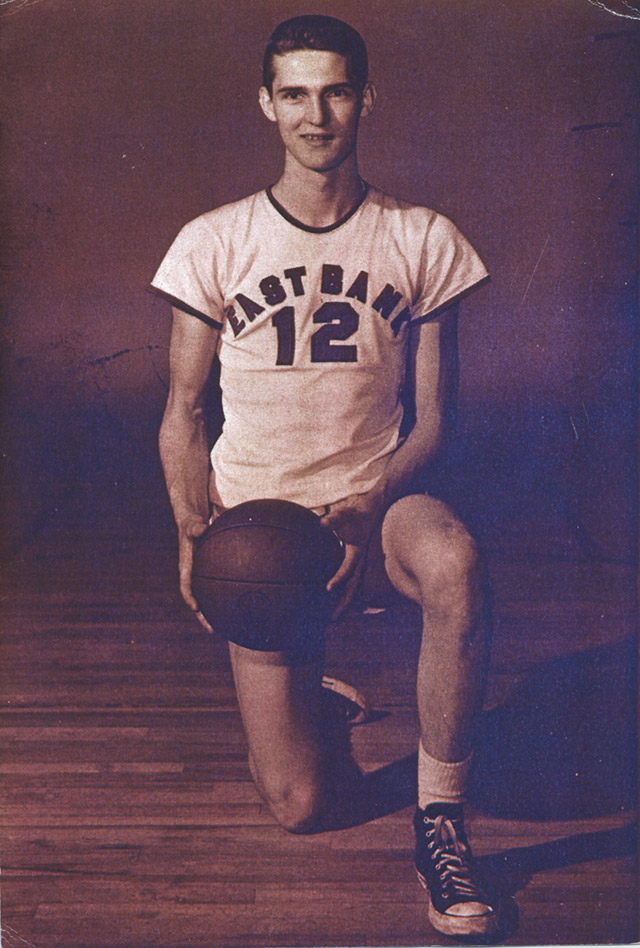 Jerry West is considered by many to be the greatest athlete West Virginia has ever produced. His amazing basketball statistics and revered reputation on the hardwood leaves little room for argument. West left a lasting impact on WVU basketball and beyond, establishing himself as one of the greats in the National Basketball Association. He is widely equated with brilliant and skillful basketball and an unmatched drive to succeed.

Born in Cabin Creek, Kanawha County, and raised in nearby Chelyan, West grew up in an impoverished family with six children. During a turbulent and sometimes painful childhood, particularly after the death of his older brother in the Korean War, West found comfort in exploring the neighboring mountains and immersing himself in the sport of basketball. A self-described ‘loner’ with an active imagination, his childhood fantasies included playing all roles on his dream team, among them coach, star player and the fearless hero making the last second clutch shot to always win the game. 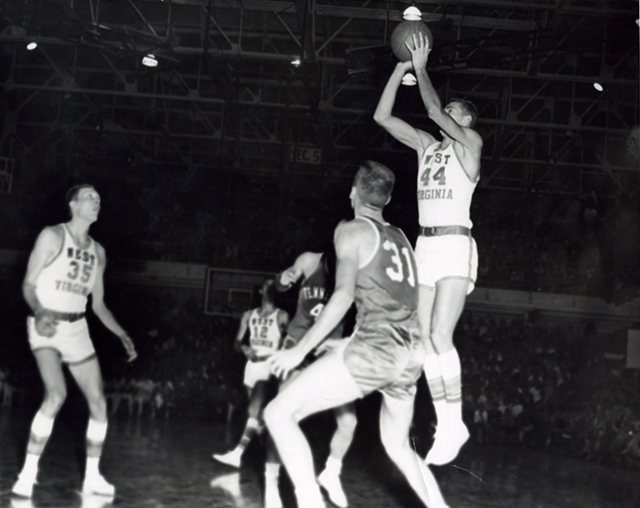 The result of endless hours of shooting hoops and pretend court play would bear fruit at East Bank High School in Kanawha County. Although he saw little playing time as a sophomore, West broke out during his junior season. In his senior year, he became the first West Virginia high school player to score over 900 points in a single season. His exploits carried his team to the 1956 state championship. After clinching the title, the town of East Bank was renamed West Bank for a week in the star player’s honor.

As a result of his impressive high school career, some sixty colleges vied to recruit West, including perennial powerhouses like Kansas and Maryland. A West Virginian at heart, he elected to attend West Virginia University and moved to Morgantown. The move to what seemed a big city proved to be a difficult transition for the shy young man. He was fortunate to find support and a maternal influence in the owner of the house in which he boarded, Ann Dinardi. A pharmacist by trade, Dinardi served as a house mother of sorts to not only Jerry but a host of other WVU basketball players during this period including Willie Akers and Rod Hundley. 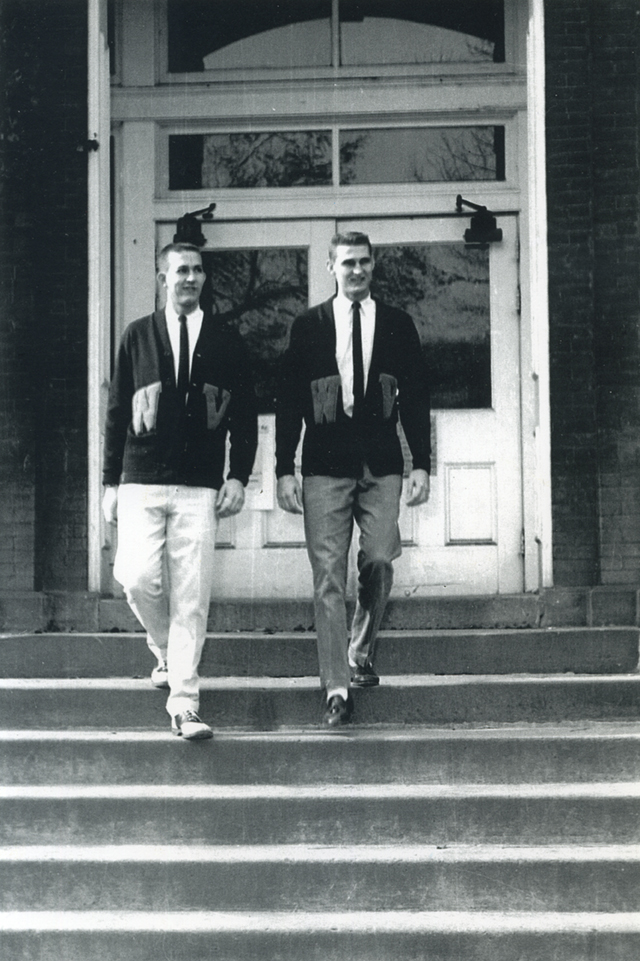 When he was on the basketball court, all of West’s discomfort disappeared. Playing under Coach Fred Schaus from 1957 to 1960, he earned an impressive assortment honors and awards. He set twelve school records in 93 games and was twice named All-American, averaging 24.8 points and 13.3 rebounds. During the West years, the Mountaineers recorded 81 wins against just 12 losses. This included an appearance in the 1959 NCAA National Championship game in which WVU lost to California by one point. Despite the loss, Jerry was named the MVP in the tournament.

In 1960, West added an Olympic medal to his trophy collection. As co-captain of the United States team in Rome, he averaged 13.5 points in eight games and helped lead his team to Olympic gold. He would later look back upon the experience of representing his nation in world competition as a defining moment in his career - winning an Olympic Gold Medal as an amateur was both thrilling and a superlative honor.

From Laker to Basketball Legend

West would not remain an amateur for long. The Lakers drafted him later that same year, just as the team was moving from Minneapolis to Los Angeles. During the next fourteen years, Jerry played in 932 games for the Lakers, averaging a remarkable 27 points, 5.8 rebounds, and 6.7 assists per game. The Lakers made the playoffs 13 times during this span, winning the NBA title in 1972. West was named to 14 All-Star teams and was elected to the Naismith Memorial Basketball Hall of Fame in 1980. 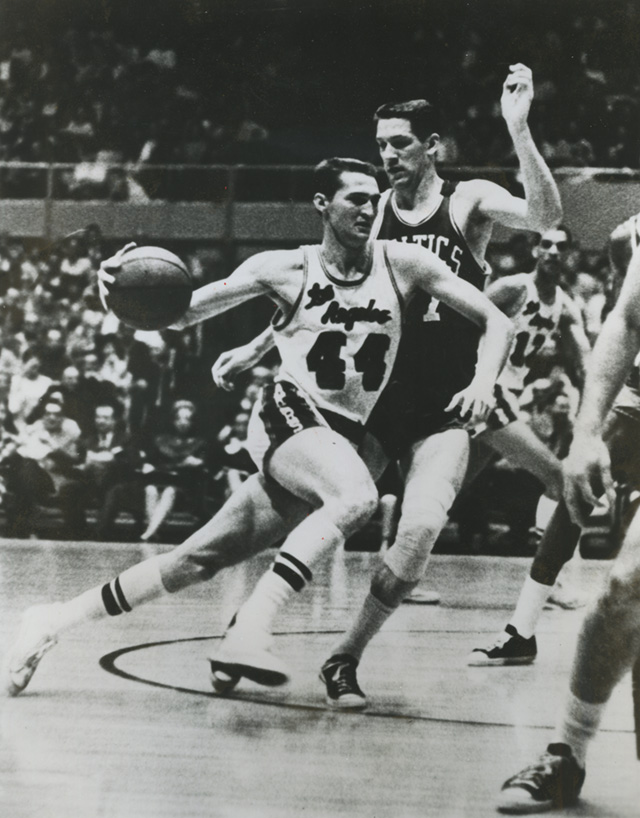 Jerry West’s extraordinary statistics on their own do not reveal all of his abilities and talents. He earned the nickname “Mr. Clutch” for his ability to make big plays at that crucial moment between winning and losing and the Lakers counted on it. In 1970, in Game 3 of the NBA Finals against the New York Knicks, West made one of the most famous buzzer-beater shots in basketball history – a 60 foot shot that tied the game.

It is widely acknowledged that Jerry is the model for the NBA logo, his silhouette deftly handling a ball against a field of red and blue. Despite his iconic status, West distanced himself from accolades and endeavored to be a team player throughout his career. While he demanded perfection of himself, he worked hard to avoid intimidating or alienating his fellow players – he was and remains extraordinarily beloved by many in the NBA.

Success Off the Court

When his playing days were over, West transitioned from jersey to coat and tie, coaching the Lakers successfully for three seasons between 1976 and 1979. He later served as a scout for the Lakers and then as General Manager from 1982 to 2002. He held himself to the same high standards off the court as he had when he was on it and became noted for his eye for recruitment. Under his guidance the Lakers winning tradition continued with 13 play-off appearances and four NBA titles. He was at the forefront of creating the Lakers powerhouse in the 1980s and again in the 1990s when he brought superstars Shaquille O’Neal and Kobe Bryant to LA. 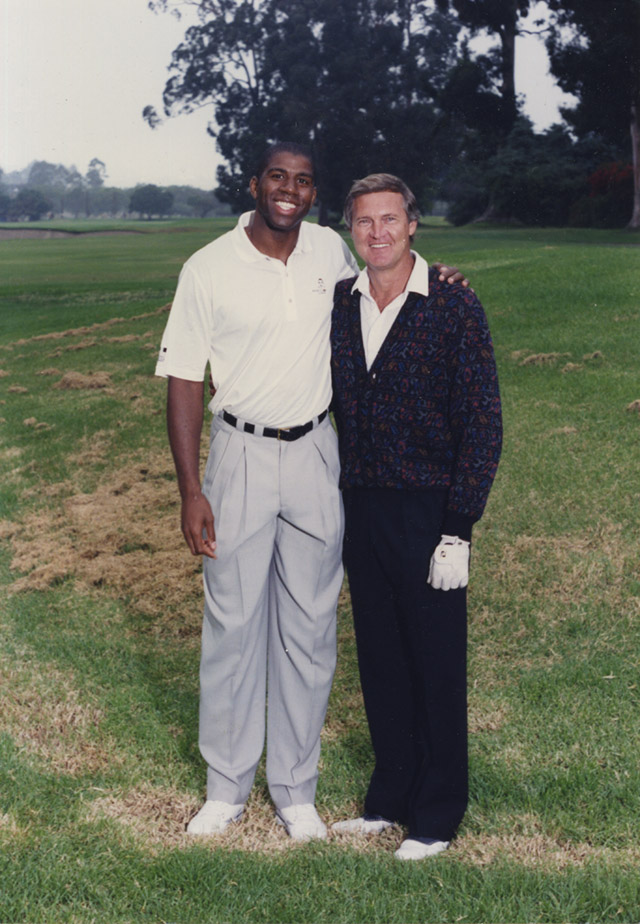 After a 40 year career with the Lakers, West retired in 2002 but couldn’t stay away from basketball. Later that year he became President of Basketball Operations for the Memphis Grizzlies, a position he held until 2007. Four years later he became a member of the Executive Board of the Golden State Warriors, a role in which he continues to this day.

Jerry West’s legacy and impact on the history of basketball cannot be overstated. His name is a household word. His profile is the very logo for the sport. His example has inspired, and continues to inspire, young athletes in West Virginia and across America to reach for their dreams. His legion of fans range from the West Virginia hills to Capitol Hill. In February 2016, at a White House event honoring the Golden State Warriors, President Barack Obama sparked a standing ovation when he described Jerry West with a few powerful words – “…NBA legend. One of the greatest of all time...”